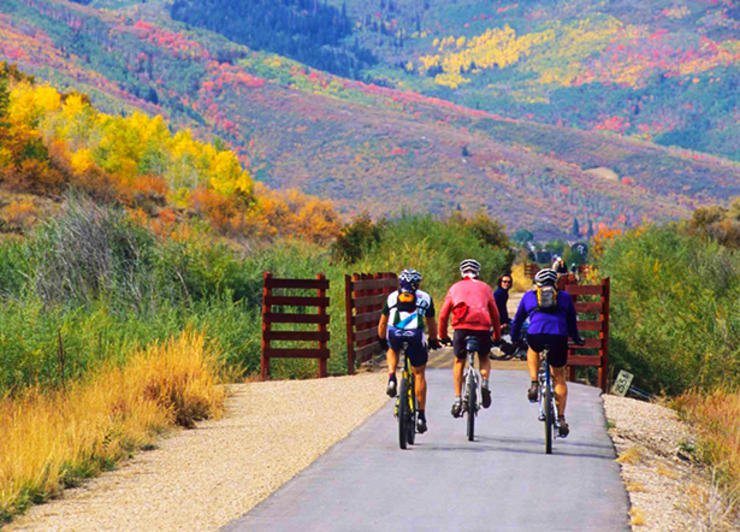 Pump up your tires, pack a picnic lunch… we have a list of the best car-free bike trails for your next family ride.

Discover and ride the 10 best cycle trails in the US.

Though the route peaks at 6,100 feet of elevation, it rarely exceeds a four per cent grade. At the start of this three-day journey, you’ll climb 1,600 feet for 14 miles from the old mining town of Deadwood, where famous outlaw Wild Bill was shot at a saloon during a poker game in 1876. By the time you hit the end of the road in Edgemont, you’ll have cruised through four tunnels and over 100 converted railroad bridges.

There’s no reason to yell “Car back!” on America’s rail-trails and bike paths, where the bike is the king of the road. On these 10 routes, take in the spectacular scenery as you bike into the old American Wild West, out of major cities along historic trails and canals, and through one of the country’s most majestic coastal national parks. — Lauren Matison

The George S. Mickelson Trail, in the heart of the beautiful Black Hills, was completed in September of 1998.

Its gentle slopes and easy access allow people of all ages and abilities to enjoy the beauty of the Black Hills.

The trail is 109 miles long and contains more than 100 converted railroad bridges and 4 rock tunnels.

While the trains are long gone and their tracks dismantled, the path they carved through the wilderness remains, having since been put to splendid use.

A multi-use trail paved over a decades-old train bed allows the walker, jogger, biker or mounted rider the chance to catch a whiff of Oregon history while delighting in the forest’s renewed splendor.

21 miles of tree-lined, easy-grade pathway conducts you through sun-dappled glades and across swift, clear streams, filling your nose with wildflower scents and your ears with the songs of birds.

13 old bridges, wooden trestles rise up to acquaint you with days of the past.

And at a mere 26 miles west of Portland, all this peaceful, quiet, natural beauty awaits you right down the road.

Acadia National Park and the surrounding Maine communities offer a truly spectacular setting for the bicycling enthusiast or professional alike.

The Park has approximately 45 miles of suitable road surfaces comprised of the famous Carriage Roads (financed and directed by John D. Rockefeller, Jr., between 1913 and 1940) and portions of paved motor vehicle roadways.

There is an unusual amount of diversity here.

Borders of the Park are accented by picturesque harbor villages such as Somesville, Northeast Harbor, Bass Harbor and many more…

This world-renowned trail winds from Folsom to Old Sacramento, paralleling the American River and stopping at many key places along the way.

Katy Trail State Park has been designed specifically for walking and cycling.

The majority of the trail is accessible to persons with disabilities.

Built on the former corridor of the Missouri-Kansas-Texas Railroad (MKT or Katy), is 240 miles long and runs between Clinton and Machens with 26 trailheads and four fully restored railroad depots along the way.

The section of trail between Cooper County and St.

Charles County has been designated as an official segment of the Lewis and Clark National Historic Trail.

Katy Trail is also part of the American Discovery Trail.

Designated as a Millennium Legacy Trail and was added to the Rails-to-Trails Conservancy Hall of Fame in 2008.

The Island Line Trail is one of New England’s most visited and spectacular rail-trails and the signature running spot for Burlington.

It borders the waterfront in the city of Burlington.

To ride the full trail is 14 miles and features a unique and scenic trip out over the lake on a marble causeway around the 12-mile point.

Other notable markers include.

Leddy Park at the 4.2-mile point, which is the city’s largest park, and features a sandy beach, picnic area, and lakefront vistas.

Paseo del Bosque Trail goes from the north to the south edges of the metro area through the Rio Grande’s cottonwood bosque (forest).

The Paseo del Bosque is a multi-use trail.

You may encounter many different kinds of users.

The 150-mile Great Allegheny Passage soars over valleys, snakes around mountains and skirts alongside three rivers (the Casselman, Youghiogheny, and Monongaleha) on its nearly level path.

Cyclists pass through the Cumberland Narrows.

Top the Eastern Continental Divide at 2,392’.

Weave through the breathtaking Laurel Highlands.

Journey through the region’s coke, coal, mining, and steel-making corridor.

Utah’s mountains are famous across the globe for both their beauty and their recreational opportunities.

The Historic Union Pacific Rail Trail State Park is one of Utah’s most unique state parks.

It is nearly 30 miles long.

The trail traverses areas rich in cultural history from the Wasatch Mountains near Park City, across wetland meadows in Silver Creek Canyon, through the towns of Wanship and Coalville and along the Weber River to Echo Reservoir.

Whether biking, hiking, horseback riding, cross-country skiing or walking, the park visitor enjoys the sights and sounds along the historic rail trail.

Trail of the Coeur d’Alene, Idaho

The Trail of the Coeur d’Alenes is one of the most spectacular trails in the western United States.

It was named one of the 25 top trails in the nation in 2012 by the Rails to Trails Conservancy.

The trail runs for 72 miles on smooth asphalt that is perfect for road bikers, in-line skaters, walkers and wheelchairs.

Spanning the Idaho panhandle between Mullan and Plummer.

It was created through a unique partnership between the Coeur d’Alene Tribe, Union Pacific Railroad, the U. S. Government, and the State of Idaho.

Dust off your cycling shoes, grab a helmet and Go For It… enjoy the best [Car-Free!] riding in the USA. 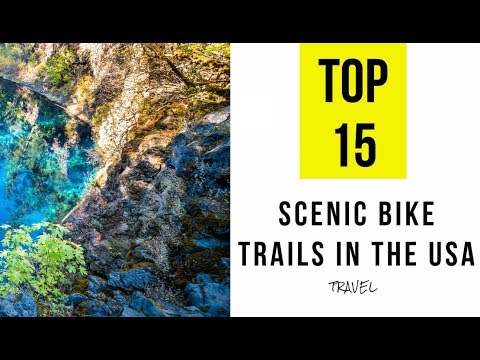 10 Best Mountain Bike Towns In The US.

Mountain Biking – Deep In the Heart of the Dolomites